Here’s a list of significant artists that James Burton has worked with and recorded several albums with.

Burton recorded with the Everly’s from 1965-1968. The hired him to play on a few of their records. They also recorded Susie Q together on the Rock ‘N’ Soul album. In 1973, Burton also recorded with Phil Everly on his solo album “Star Spangled Springer”.

As many bands did back then, The Monkees also hired studio musicians to play on their records. So from 1966-1969, Burton played on many of The Monkees’ albums.

Burton recorded with Haggard from 1966-1970’s. During that time, Burton played on several hit records like “I’m A Lonesome Fugitive” and “Working Man Blues”. Whenever he had the time, he would perform live with Haggard.

From 1969-1990, Burton recorded with Hoyt Axton and occasionally performed live with him.

Even though James only recorded 2 albums with Gram, they were of significant influence on Grams career as well as Emmylou Harris’. Many of the musicians used on this album were the same musicians who were also working with Elvis Presley at the time, like Ronnie Tutt and Glen D. Hardin.

In 1979, Burton started working with legend Jerry Lee Lewis. After a few years, Burton would also perform live the Killer. In the 90’s, Burton also toured with The Legends of Rock and Roll in Lewis’ band. 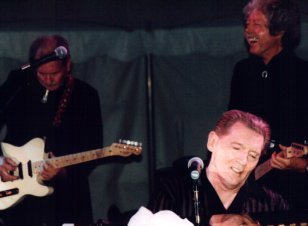 In 1986, Elvis Costello was ready to record his new album, and he knew exactly who to get. He hired 3 of the other Elvis’ TCB Band members: James Burton, Jerry Scheff and Ron Tutt. During the time Burton recorded with Costello, he would also appear live with him. 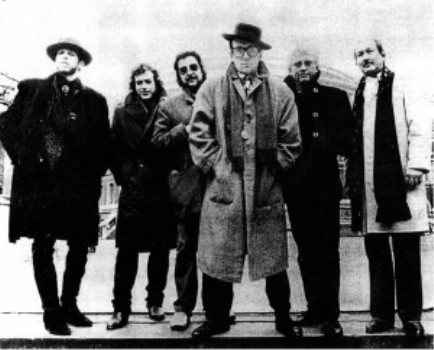 Other artists James has worked with over the years include Roy Orbison (A Black and White Night), Johnny Cash, Norah Jones, Keith Richards, Bruce Springsteen, Joni Mitchell and many, many others.

Check out the discography for an overview of recorded albums.