In 1957, James was working on the Louisiana Hayride, a very well known radio show at the time. There he met Bob Luman. The band was called ‘The Shadows’ and consisted of James Burton on lead guitar, James Kirkland on bass and Butch White on drums. Together with Luman, they made a movie in Hollywood, Carnival Rock. It was in Hollywood where Ricky Nelson first heard them rehearse and decided to hire them for his own band.

The following records were recorded by Luman with The Shadows: 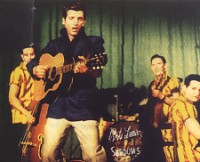 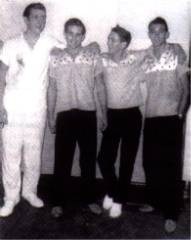 The following records were recorded by The Shadows:
Jumping with the Shadows
Shadow Rock
The Creep

Bobby Lee Trammell was also on the Louisiana Hayride when he met James Burton. He took him and bassplayer James Kirkland to California to record ‘Shirley Lee’ and ‘I Sure Do Love You Baby’ in 1957. Ricky Nelson later covered this song with Burton and Kirkland.